I went to see the midwife on Wednesday and she booked me in for a membrane sweep for next thursday if nothing has happened by then. I had to have one with Seth and it got things going, but those who know what it is or have had one will understand why I cringe at the thought! Hopefully things will move along before then but as of today he/she is a day late. I'm not amused! Worst case scenario is even the sweep does nothing and I have to go into hospital and through labour induction next saturday. Please people pray for me while you knit for a nice spontaneous and quickly resolved labour.... like in the next five minutes, or an hour... just let me make sure I have time to pack the camera and chocolate!

On a more cheery note, the Green Thumb mittens are finished :o) Sheer miracle that I've completed them in 3 days and on dpns too. I'm going to attempt to configure a ribby scarf and hat to match using the leaf motif. I'm thinking that a scarf is no problem really, but the beanie hat- well a bit ambitious but I'll give it a go. It would make a great gift set for someone or even for myself. I'm still deciding! 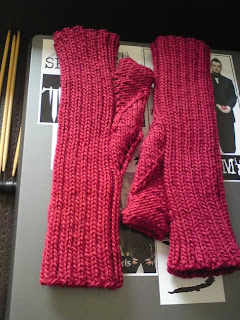 Im rather pleased with them and now Dan wants a non leafy pair in a manly but boring grey/blue/black. Hmmm for someone that doesn't "see the the point of knitting" he sure gets me to make him a few things like fingerless mitts while he's on the pc or an ipod cover ;o)

Hopefully I'll have more exciting news next time I blog. x
Posted by scarletprincess at Friday, May 22, 2009

Hope all goes well! Thinking of you!