Hi folks!
I cannot believe it but I won another competition! Rooknits hosted a competition for her 100th blog post and asked for suggestions for a sock pattern. Since i love the Jaywalkers pattern i suggested that and YAY she picked me! I had a choice of either Lorna's Laces or Posh Yarns in any colour I desired! What a prize!! I chose Posh Yarns since i haven't used it before in a colour called "Tweed Coat". I shall post a picture up when it arrives :o)
I have been making aprogress with my take on the "Buttony Sweater". I have made short sleeves so that I have enough to carry on knitting the body. I think I made a few more increases so I have a larger number of stitches... so needing more yarn. However it is discontinued now so I thought if I shorten the sleeves I should have enough. If not then I'll be disappointed to frog this yarn for the second time :o( 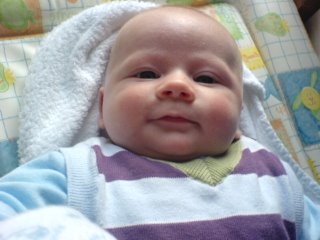 This cheeky chappy is my lovely son Seth! He's been much better though this week his delicate tummy has not been coping so well with the weaning... though at the time you can see he loves his food! 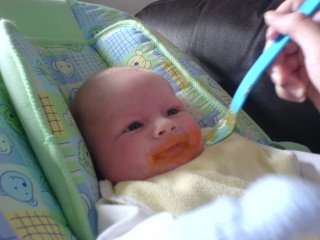 Well I have to go get the groceries with Seth in tow so I'd better get my ass dressed if we're to have a chance of getting a trolley to put his car seat on! he's way too heavy to be carrying around! Must have him weighed this week.... I'm guessing about 14lb. let ya know how it goes. x
Posted by scarletprincess at Saturday, November 25, 2006 2 comments:

Wow it's been a while!

Sorry it's been a while but family life really does take over pretty much everything else!

I had such a beautiful surprise yesterday. My friend Fiona (it gets confusing with us having the same name... and sounds weird too!) had crocheted Seth an absolutely wonderful blanket. It must have taken so long to do and it's gorgeous! 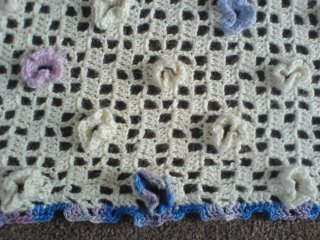 This is the detail of the edging and flowers added. 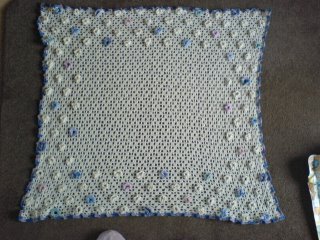 This is an overview shot on my rug... with a hint of slipper and changing mat too!

If she reads this- a HUGE thankyou once again!

Well, I have been knitting! In the little spare time I get I have been working on a few projects and once again, I keep starting new ones and not finishing others. Ah well.

The tropicana socks got frogged for the 3rd time since there was no way my feet would fit them so I reincarnated them into falling leaves socks. However, they have now come up too big and so they will be destined as present socks for my sister. I can't really post a picture up yet in case she reads my blog though... but they are going to be in the Lorna's Laces Desert Garden colourway. A shame I'm giving away my favourite sock colours but ho hum... it'll be for christmas.

I have also been working on a few things for myself of course! I saw a pattern for a 'buttony sweater' while blog browsing. I have no idea how I got to it but I really liked it. Plus I had a load of DB Merino Chunky from the failed attempt at the fairisle cardigan from Stitch and Bitch Nation. And so... I have got to just before the splitting the sleeves off (it's top down you see) so I need to take it off the needles and onto wast yarn to try it on. Yawn. There's over 200 stitches on the needle atm so it'll take a while. What isn't boring though is the colour! I've taken a leap and done the collar ribbing in a magenta colour and the body of the cardi is in purple! I will post pictures if I manage to get much further!

Also, I couldn't resist trying out the lacy "ariel" pattern in the 'Yarn Forward' magazine. I think it's so beautiful. I have only bought a cheapy yarn for it though it is really pretty. I reckon I'll end up re-casting on for the middle size though and knitting it on smaller needles. Good thing I've only knitted 3 rows so far! The bust sizes are 32/42/52 inches. Since I'm 36 bust I'me stuck for whether I should cast on the 32 or 42 and either use larger or smaller needles. Hmmm. Usually I wouldn't bother with something so fiddly but I really want this top!

Well as far as family life goes we seem to have sorted out Seth's colic problem... he's intolerant to milk! He's been on Soya milk for about 3-4 weeks now and not only has the awful screaming gone but he's such a happy baby now it's so much better being a mom. Switching his food is still awkward though as not only is the soya milk powder expensive, it's hard to find too and one of two places I could get it from has stopped stocking it.

This morning I had such fun making him vegetable purees! Since he's such a big baby and has his appetite back I've been giving him a tiny amount of breakfast and dinner. Most of the baby foods have milk protein in so it's pretty limited on what he can have and since he has so little it isn't economical to buy jars or tubs. And so this morning I made two purees which I've put into an ice cube tray. I made 'butternut squash and parsnip' and 'sweet potato and carrot'. I boiled them until soft and then mashed them and squeezed the mash into a sieve so that only the very soft and runny stuff got through. It took ages for such a little amount but I enjoyed making something I know is good for him and has no milk or artificial stuff in it.I'll leave it a while until I add a small amount to the baby rice but he's bored of the same stuff. I might have a go with fruit for his breakfast.

Well I'd better go and carry on with the housework (double yawn) since my friend Becky from work should be coming over later. Yay- someone sane to talk to!!
Posted by scarletprincess at Sunday, November 12, 2006 6 comments: