Today I'm fortunate to have the day off- Hurrah! So, i thought to myself, why don't we have a go at getting blogger to play nice?

Ta da!.... the picture that has been waiting for about 3 weeks to get up onto your screens: 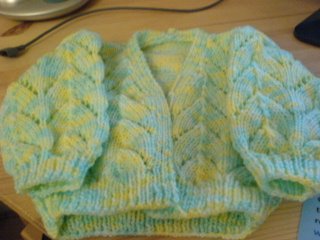 I realise it's no masterpiece but I really like it all the same. I just have to find some unisex buttons to match now. The yarn is by Jarol I think- run of the mill variegated acrylic in lemon/blue/mint mix. I still have over half the ball left (it was a 200g ball) and I'm not quite sure what to make with the rest. There isn't a bootee, hat or mitten to match and I like the v-neck option better than round neck.

Today I finished the baby bootees I've been knitting. I started them sunday in Sirdar Country Style 4ply in white. For acrylic this is really soft. The pattern of the bootees match a cardigan pattern I adapted a while ago in another yarn. I like the little cables on them: 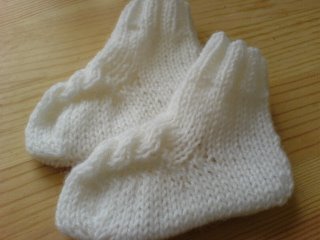 This is the size 3-6 months. I have a feeling these wont be far off the size of the fee of the baby when it's born! I think I'll make a pair in the 6-12mth as well in another colour.

These are from a booklet called "Newborn Collection" by Patons. This has some really lovely patterns in it but mostly they are for either a boy or girl- apart from the cardigan I have already done from this book I don't think any of the others are really unisex enough. I'll definately use this book after the baby is born though.

I'm still on the search for worthy patterns! It looks as if I'll have to go on the lookout. Thankyou to those who posted suggestions! Unfortunately I'm not all that keen on the EZ surprise even though I found a pattern free which is very similar and I think the only Lucinda guy pattern books I found started from 2yrs :o( I'm just awkward!

Well I don't have much else to report. I have ante-natal at the docs again tomorrow morning- same old blood pressure check, heartbeat monitoring a more measuring to say it's long legged like it's dad! Afterwards though I'm going out with my mum and dad to get some plants for my garden.

Hopefully the decorating in the nursery will be finished today- just have the border to put up so i'll post some piccys when thats done.

Time flies after having fun!

I can't believe how time gets away from you when you keep meaning to do something. I've been meaning to post some pics for weeks and well now we have quite a few!

The Foo Fighters concert last Saturday was absolutely fantastic! i had such a great time and sat on the grass for most of the day so I didn't get overtired. It was rather hot though! I looked a little silly with a hat and plastered in sun cream when there were so many skimpily clad people about, but at least i didn't suffer afterwards. 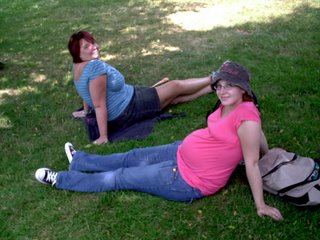 Here I am with one of our friends that came with us before the concert. We just sat under some trees before going into the event. (Yes I'm the heavily pregnant one!) 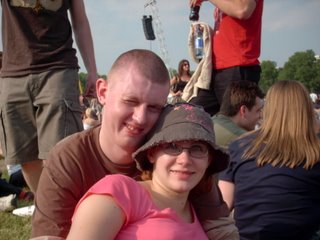 This is me and my DB in the concert area. There were 85,000 people in there! I don't think I've seen so many people in one place. 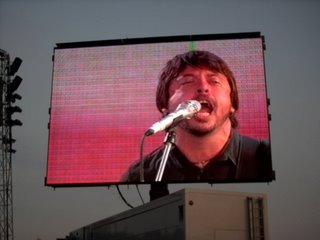 I had to post just one pic of Dave Grohl. I adore him as he's just so talented and also just a really nice guy.

I have managed to get some knitting done. Not a lot mind. I finished a baby cardi and it is actually sewn up and everything! It does need the buttons putting on, but I like the design.
It had just enough going on in the pattern to keep me interested. I just find plain stockinette really boring at the moment, but I don't have much attention for bigger projects.

The solution: I need to find pretty/interesting patterns suitable for a baby boy or girl that will not take forever and keep me interested. Any suggestions?

O.k. well what has been good today is I went and got the wallpaper and border for the nursery, bathroom and the living room paint. Now that I have the baby's paper the furniture will be able to be put up and voila! I'm so excited now, but I think it's starting to drag now. The heavily pregnant phase is a bit wearing!

Before I go I have to say thankyou to blueadt. I've bought some of her de-stash and will be happily receiving it soon. I'm going to attempt yet another baby blanket, but this time using domino squares. I'm hoping this wont be as diappointing as the last blanket that ended up rhombus shaped instead of rectangular!
I've really enjoyed mailing back and forth with her and just want to say thanks for her suggestions and advice.

Also, I'd like to say to the girls at Beatties knit chat that I haven't disappeared! It's been so hectic moving house and sorting things out that my Saturdays have been precious hor running errands and so on so I really haven;t had the chance to come along. I hope that I'll be able to make it again over the next few weeks.

Right ho... I'm shattered now so I reckon I'll be off to bed so I can start again tomorrow on the house. Sigh! at least it will be worth the effort!
xxxx
Posted by scarletprincess at Saturday, June 24, 2006 4 comments:

Just a quick post from me for now, I'll be back with a bigger update soon though. I'm off to see the Foo Fighters tomorrow in Hyde Park, so I've both very excited and a bit nervous.... considering I'm nearly 30 weeks pregnant!

There are 4 opening acts before the Foo Fighters too... Queens of the Stoneage, Angels and Airwaves, The Subways and Motorhead. Phew and thats before the biggie! The show starts at 4pm so it's going to be a long day with travelling down there by coach in the morning. I will be able to rest up before hand though on the drive down.

So today i booked the day from work and went on a shopping expedition to Birmingham city centre and got a few things with DB. He was well chuffed with a new 'animal' t-shirt, 'o-neill' combats and belt plus some new 'animal' trainers. Me, however, I cannot fit into things quite so trendy atm since the bump is not really catered for but I did get some t-shirts from Gap which are long and will look nice with my (maternity) jeans and some new 'converse' trainers i got today.

So when i get back and have had a little rest I'll post up some promised pictures and let you know how it went.

Wow is it hot!! I'm struggling in the heat with this huge bump and being overtired and generally run down this week has meant I haven't been to work. I shall go back Monday if only for the laboratory air conditioning me thinks!

I had my mammoth ante-natal appointment today and good news all around:
* I wont be needing heparin throughout the rest of the pregnancy since they've decided my clotting results are o.k. for now,
* It doesn't seem that I have gestational diabetes from the initial results of my blood test today (though I'll have to see what the other results were like). The Glucose Tolerance Test I had was awful; a BIG SORRY to all the ladies I had gone through this horrific test with when I used to peform them in my previous job. I really feel for you!
* I had my first prophylactic anti-D shot as well... this prevents a disease where you make antibodies to your baby's red blood cells and can be serious.
Hurrah!
* And finally it has been confirmed once more I'm having a baby giraffe since I'm only 28 weeks and the baby is already 28cm... which is no surprise since my DB is 6ft7in and was 2 feet long when he was born. I hope we dont get one quite so long!

Well the move went well. DB has done so well with making a start. Not all of our (my) boxes have been unpacked but the garden has been tamed and he made a start on the baby's room :o)

When I get around to it I'll post some pictures up. I started a baby cardigan wednesday and have a front to finish and another sleeve to do. It's fairly easy lace panel in the fronts and sleeves, but I reckon it'll be knitting the front bands that will get on my nerves if anything!

Apart from that I made a small, chunky blanket but the pattern I used gave it a biased direction and I'm not impressed. I dont think it's going to survive as a usable item being rhombus shaped instead of rectangular. Hmm. I still have the remainder of the balls which will be enough I think to make another in a better pattern. I just find this heat is making me reluctant to knit. Well reluctant to anything actually!