I managed to retrieve my UKSwap parcel today from the depths of the Royal Mail postal depot and was utterly thrilled to see the contents. My swap partner was flapjack (ravelry name)- thankyou so much!!!! I cannot believe that you got me things I just love!

This is the entire parcel here:

As you can see there's chocolate, silk garden sock yarn, a 'lightning' plant, needle felted hedgehog, baby alpaca fibre a charm made from microscope slides and my theme pic and.... a ball winder- Something I've harped on about wanting forever! How generous is Helen?!!!

Here's a few close up pics... I was tired last night so they're taken while I'm actually in bed. LOL

Here's the baby alpaca fibre- something I haven't tried to spin on it's own before but my god is it scrummy!!!!

This 'lightning' plant is a carnivorous plant! My DB had been wanting something like this for ages... boys and morbid curiosity ya know how it is! So I said if he wanted to grow it then I'd let him. It's also something to do with me being rubbish with plants ;o)

This is the needle felted hedgehog which is just darn cute! He's very sheepy smalling so I think he was from natural fleece.

This is the noro silk garden sock yarn. This is so lovely. I'm not a sock gal but it's pretty enough to make something else with. I'm in baby knitting mode at the moment as my brother in law's sister (you get that?) is almost 20 weeks now. I think she's going to ask the sex of the baby so if it's a girl this would be ideal for some of these bootees or these mary jane style ones- Just. So. Cute.

Here's just a few things I've been spinning up lately. I've finished the 'Sexy' fibre batts which are here:

It's basically pink sparkle, black slippery stuff I assume to be nylon-y or silk, pink and red wool. I'm terrible at deciding what is which fibre, but I'm getting better I think. This is very thick and thin as there are neps in the batt so it's sort of worsted weight but variable!

Here is something I've started:

This is alpaca, silk and merino. No sparkle in this one. It is so gorgeous and soft though- I think the brown is alpaca as it's quite lofty and got a halo to it, the pink I think is merino and the creamy white is the silk. I've aimed to get this about sportweight and I have two more batts of this so hopefully enough for a scarfy project or mittens.

Due to unexpected fibre stash enhancement I also have started a little of the baby alpaca to see how it spins up:

Again, I'm aiming for sportweight/4ply to get the most I can out of it. I'm not normally an 'orange' person but I totally love this . The alpaca is not that hard to spin and it's so fluffy. In fact I bought another orangey batt (shhh DB thinks it was a present) which is rusty orange, browns and foresty green.

Oh.... I do have some news. It's totally fresh up to date news which is a novelty where I'm concerned. I found out on friday that I'm pregnant. Only 5 weeks. It's not even official as far sa going to the doctors and stuff like that, so I haven't told anyone in my family. DB is a bit reluctant to say the least- while he'd never say to not have the baby I think he would have wanted to wait a while longer and is going to take some time to come to terms with things. I'm excited but wary- I want him to want the baby so I'll look after myself as best I can in the mean time and when he's ok with things (or at least says the word baby as he hasn't yet) I'll talk to our family. I'm going to try and get to the doctors this week because they have to take a urine sample and send it off (like anyone is silly enough to lie about being pregnant). I really want to tell people as I'm the worlds worst secret keeper but I would understand him being upset if I told people before he's ready. It throws more spanners in the works but I've wanted another baby for ages whether it's practical or not!

Well, best go and eat something... my tummy is growling for food. I just cannot eat as soon as I get up and I tend to leave it a bit longer than intended when I'm running around after Seth. Yesterday I was feeling queasy, though it's more likely to be psychological- I don't think we're supposed to feel the morning sickness for a few more weeks are we?

Got my UKSwap prize from nic's etsy shop today :oD 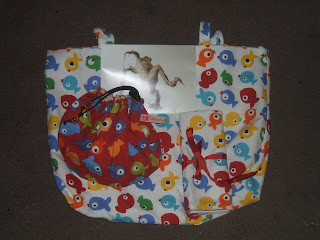 Isn't it gorgeous? I love the funky print, it's co-ordinated and cool. Amazing how she made these with her own bare hands just for me!

Seeing as I was on etsy.... I managed to stray upon one of my other fave sellers- FeltStudioUK. Her stuff is beautiful too. I ordered this even though I shouldn't have ;o)

Isn't it lush- I love the combination of burnt orange and petrol/grey. I saw it and couldn't resist. I've spun up 2 out of 3 lots I've bought from her so far so I guess I'm not so bad at hoarding fibre!

Well, being back at work sucks! Also, I got locked out of my house because my nephew who is staying with me borrowed my keys and then also took my DB out so no-one was in when I got home with Seth. I ended up getting Db's stepdad to pick us up for an hour. hmph!

Well I didn't trip over or fall off the stage and all went well!
Just a quick post before I have to put Seth to bed and then I have babysitters (god bless nephews and their girlfriends) to look after him while Dan (DB) takes me out for a meal!

Here is me at the uni after getting my robes: 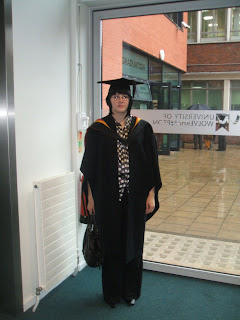 This is the proud parents: 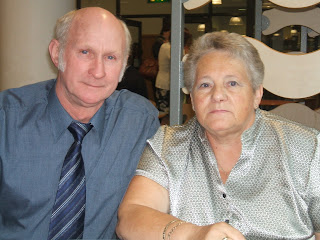 Here is my little man congratulating me when I got home: 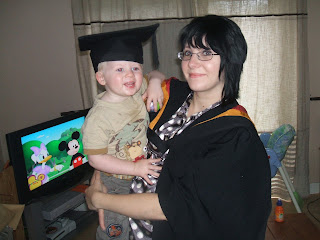 As soon as we get back from our meal we will be present wrapping- it's Seth's 2nd birthday tomorrow! How time flies.

Today I graduate from uni. Me- very very nervous! I haven't eaten yet this morning my stomach is in knots because I don't like stages or people watching me or anything like that. I'm taking my mom and dad with me and, as Seth is too young to be carted around with us, Dan (DB) is staying at home with him.

Now, I've been studying forever for this degree! Instead of 4 part-time years it's taken 6! Having Seth and vile depressing Honours Project of Doom saw to that! But, I have no regrets and I'm happy I stuck with it. There are 3 of us from work who are graduating today and we're going to be the last 3 for some time as our department isn't taking any more trainees while the shift hours haven't been implemented or decided properly.

Also.... I had a letter from the university yesterday- they're fantastic at giving you very little notice- saying that I have won a university prize. The letter invites me and my guests (mom and dad) to the prizewinners reception after the graduation ceremony. I don't even know what the prize is! Knowing Wolverhampton University it will be something lame but I'm on a bit of a winning streak lately! Maybe I should put a £1 on the lottery!

I really didn't sleep much last night but my head is buzzing and the adrenaline has me thinking "what if the queues for the robes are really long?" and "what will I do if trip and make an arse out of myself?" etc etc.

Anyhoo, I have to go and smarten up because I'm pretty sure they wont let my collect my degree certificate in PJs and a fluffy dressing gown- even if it does have pink hearts all over it! Snazzy!

No doubt I'll post soon.... my UKSwap parcel is due any day now and I'm sure my dad will have many many pics from the digital camera!!! 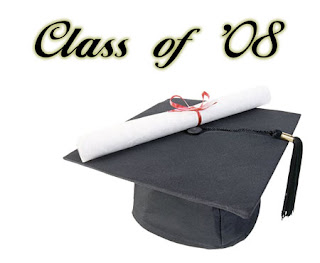